Traveling to Casablanca? Make sure to spend at least 2 days in Morocco's largest city. We recommend you to have a guided tour of Casablanca's major landmarks, including Hassan II Mosque, the second largest religious building in the world. Stroll down the Atlantic Boardwalk and admire the French-colonial and traditional Moroccan designs blend in the downtown area. Want to get some local vibe? Spend some time in the Quartier Habous and Ain Diab....
Your Journey
We are going to help you to plan the most amazing journey. If you have any ideas or suggestions, contact us at any time.
Please select date

When traveling to Morocco, there is no doubt that you will start your journey in the capital - Rabat. You will soon learn how ideal it is. The imperial city, situated at the mouth of the river Bou Regreg, facing the Atlantic Ocean is one of the biggest players in textile, food processing, and construction industries. Besides the industrial side to it, Morocco has a lot to be proud of. City's Medina is included in UNESCO World Heritage sights and should be included in during your time there. You also should visit the 12th-century Kasbah of the Udayas, Hassan II Tower - the most visited sight in Rabat, the medieval fortified Chellah Necropolis, and the Mausoleum of Mohammed V. where you can look into Rabat's past and visit the bodies of king's father and grandfather. ...

No Morocco itinerary can be complete without some time spent in Fes. The city that came to live in the 9th century is one of the largest municipalities in the country and has a lot to show for every visitor. Besides the fact that cars are not allowed inside the medina, as the entire place is listed as a UNESCO World Heritage Site, you would also be surprised to learn that it has the second oldest university in the world, founded in 859. There is a lot to learn about the Moroccan destination gem, but even more to see. Like the Chouara Tannery for instance, where you can witness how the leather goods have been produced since the 11th century, the colorful sight will stay long in your memory....

Car
Connection | Fes - Merzouga
Private Transfer Sedan
The drive itself from Fes to Merzouga takes about 7 hours, several sightseeing stops are planned on the way. While traveling through the Middle Atlas Mountains, you pass the town of Ifrane often referred to as the Switzerland of Morocco for the surrounding mountainous landscapes and famous ski resorts. Another highlight of the area is Ifrane National Park - the natural reserve abundant with aromatic Atlas Cedar and a home to the largest population of Barbary macaques at this point considered to be endangered species. Closer to Merzouga, you make a stop and enjoy panoramic views of Ziz Valley which has historically formed a part of a traditional caravan trading route between the settlements of Northern Sahara.
Fes hotel
Fes, Morocco
7 hours
Merzouga hotel
Merzouga, Morocco

Still wondering if there is enough time to see all of Morocco? Probably not, but you should leave at least a day for this beautiful corner of the country. The tiny town is located on the sand of the Sahara Desert close to Algeria. Just outside Merzouga, you can visit a seasonal salt lake that is gone during summer and only appears during the colder months of the year. But if you still happen to be there once the lake has dried, don't worry you can still have fun, like experience a relaxing sand bath, which is often recommended for those suffering from rheumatism and general body aches. Of course, a camel ride to Erg Chebbi sand dunes should be on top of your priorities.... 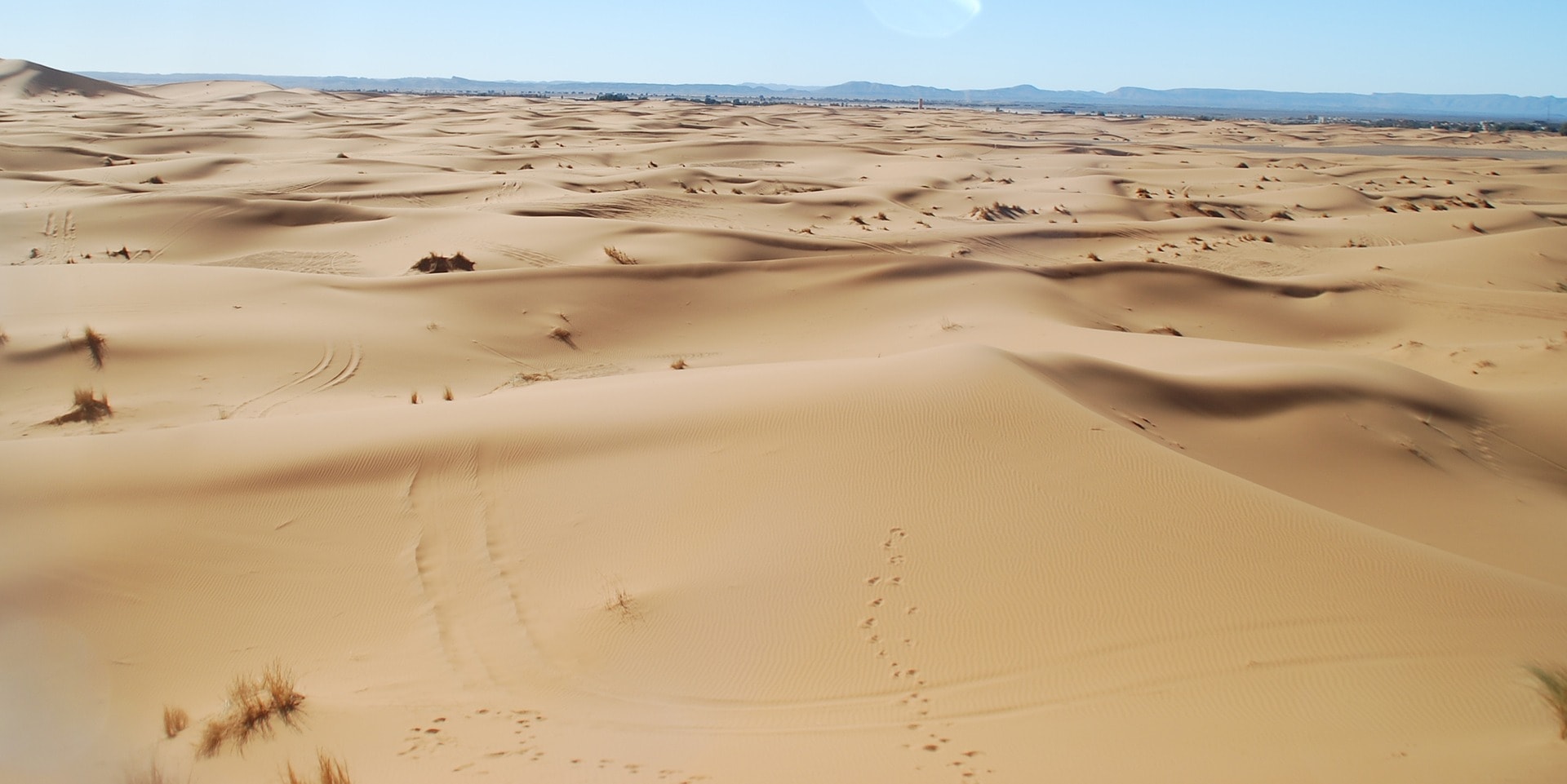 The desert is probably the best place to gaze at the stars. Take this chance and witness the Milky Way!...

Car
Connection | Merzouga Desert - Skoura Oasis
Private Transfer Sedan
The drive itself from Merzouga to Scoura Oasis takes about 5 hours, several sightseeing stops are planned on the way. On the way, you reach the spectacular gorge of Todra - one of the most breathtaking sights in Morocco. The gorge was carved by the Todra river that formed cliff-sided canyons in the mountains. The final 2000 ft of the gorge are stunning as the canyon narrows to a flat stony track, which is as little as 30 ft wide in areas with sheer and smooth rock walls.
Merzouga hotel
Merzouga Desert, Morocco
5 hours
Skoura Oasis hotel
Skoura, Morocco

One of the most stunning oasis in the country, Skoura, will enhance any Morrocan itinerary. From the first impression, you might think that Skoura is just a line of trees, but don't misjudge this beautiful corner of the country. It's so much more than that! You will be spoiled by amazing nature views and will have the chance to witness some of the most unique landmarks in the region. Many travelers wander here because of its main landmark - 17th-century Amerhidl Kasbah, attracting wanderers with its impressive design. ...

Car
Connection | Skoura Oasis - Marrakech
The drive itself from Marrakech to Scoura Oasis takes about 4.5 hours, several sightseeing stops are planned on the way. The first highlight of your 4,5-hour journey is a charming city of Ouarzazate which is often referred to as the Gates of the Desert and was formerly an important hub for African traders. While your journey continues, you reach another UNESCO site - Ait Benhaddou, the unique mud brick city on the edge of the High Atlas Mountains that was often featured in movies, mostly replacing Jerusalem. Next comes the Rose Valley - the region between the Atlas Mountains and the Sahara Desert which is the major producer of rose oil and water in the whole country. Traveling in April or early May allows you to see the Rose Valley in all its beauty. The final leg of your journey takes you through the famous mountain pass in Morocco - Tizi’n’Tichka, and gives you the opportunity to admire magnificent views of numerous Berber villages, snow-capped mountains, and green valleys.
Skoura, Morocco
4 hours
Marrakech, Morocco

Traveling to Marrakech? Make sure to spend at least 3 days in the "Ochre City". We recommend you to have a guided tour of the major landmarks of Marrakech, including the 19th century Bahia Palace, Saadian Tombs and El Badi Palace located nearby. Visit the vibrant Majorelle Gardens for more contemporary feel. Interested in local cultural experience? Then you can't leave Marrakech before bargaining at the souks and attending the tanneries....
Add destination
What’s included:

Not included:international flights, multiple arrival/departure transfers, other meals not mentioned in the program, optional tours and services, all personal expenses.

Note:
1. Hotels availability is subject to change. In case current hotels are booked out we will provide alternative hotels of an equal value for you.
2. We include 1 vehicle for your arrival and departure transfers. If multiple vehicles are required additional transfer costs will apply.